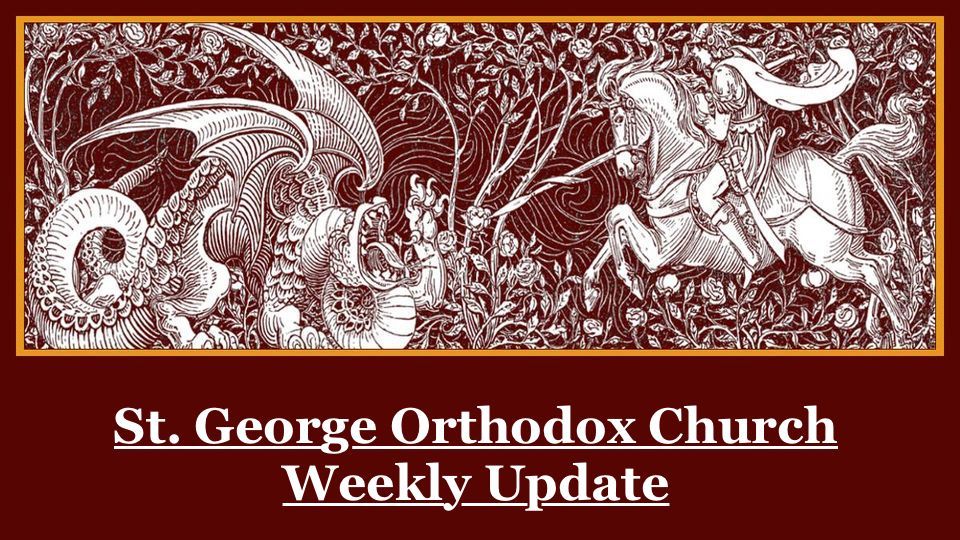 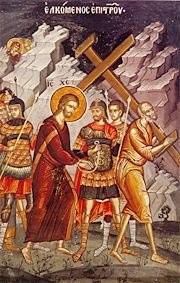 The Veneration of the Holy Cross, The Third Sunday of Great Lent
The Third Sunday of Lent is that of the Veneration of the Cross. The cross stands in the midst of the church in the middle of the lenten season not merely to remind men of Christ’s redemption and to keep before them the goal of their efforts, but also to be venerated as that reality by which man must live to be saved. “He who does not take up his cross and follow me is not worthy of me” (Mt.10:38). For in the Cross of Christ Crucified lies both “the power of God and the wisdom of God” for those being saved (1 Cor.1:24).
With the help of God, we have almost reached the middle of the course of the Fast, where our strength has been worn down through abstinence, and the full difficulty of the labour set before us becomes apparent. Therefore our holy Mother, the Church of Christ, now brings to our help the all-holy Cross, the joy of the world, the strength of the faithful, the staff of the just, and the hope of sinners, so that by venerating it reverently, we might receive strength and grace to complete the divine struggle of the Fast.
Apolytikion For the Cross
Save, O Lord, Thy people and bless Thine inheritance; grant Thou unto the faithful victory over adversaries. And by the power of Thy Cross do Thou preserve Thy commonwealth. 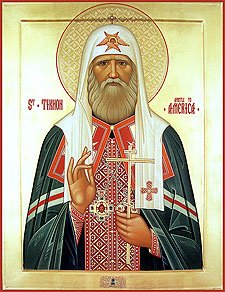 This Wednesday, April 7th, we commemorate St Tikhon, Patriarch of Moscow and Enlightener of North America
Born in 1865 in the region of Pskov, our Father among the Saints Tikhon was tonsured a monk in 1891 and ordained to the priesthood in the same year. From his early years he displayed a particular religious disposition, love for the Church as well as rare meekness and humility. In 1897 he was consecrated Bishop of Lublin, and a year later appointed Bishop of Alaska and the Aleutian Islands, with his see extending to all of North America from 1900 onwards. He did much to unite the Orthodox Christians of a great many ethnic backgrounds in North America, so that there was indeed one flock under one shepherd. In 1907 he was made Archbishop of Yaroslavl and Rostov, and in 1913, Archbishop of Lithuania.
In 1917, when he was Metropolitan of Moscow, he was elected to be the first Patriarch of Russia in over 200 years, in times that could not have been more difficult. After the Revolution of 1917, the persecution of the Russian Church by the atheist government grew more bold and more fierce with every year. By nature a meek and peace-loving man, Tikhon sought to determine, while giving only to God that which is God's, what could be given to Caesar to preserve peace and avoid the shedding of blood. At his departure on the feast of the Annunciation in 1925, Saint Tikhon made the sign of the Cross thrice, pronouncing the words, "Glory to Thee, O God!" Because of the many unspeakable sufferings he endures as Patriarch, he is honoured as a Confessor.
All who met Saint Tikhon were surprised by his accessibility, simplicity and modesty. His gentle disposition did not prevent him from showing firmness in Church matters, however, particularly when he had to defend the Church from her enemies. Being a good pastor, who devoted himself entirely to the church’s cause, he called upon the clergy to do the same: “Devote all your energy to preaching the word of God and the truth of Christ, especially today, when unbelief and atheism are audaciously attacking the Church of Christ. May the God of peace and love be with all of you!”
Note: St. Tikhon's repose was on the Feast of the Annunciation according to the Old Calendar (March 25), but on the New Calendar his repose falls on April 7. Click on the button below to read a more detailed account of St. Tikhon's life.
Holy St. Tikhon, pray for us!
More on the life of St. Tikhon

St. Paul's Letter to the Hebrews 4:14-16; 5:1-6
Brethren, since we have a high priest who has passed through the heavens, Jesus, the Son of God, let us hold fast our confession. For we have not a high priest who is unable to sympathize with our weaknesses, but one who in every respect has been tempted as we are, yet without sin. Let us then with confidence draw near to the throne of grace, that we may receive mercy and find grace to help in time of need. For every high priest chosen from among men is appointed to act on behalf of men in relation to God, to offer gifts and sacrifices for sins. He can deal gently with the ignorant and wayward, since he himself is beset with weakness. Because of this he is bound to offer sacrifice for his own sins as well as for those of the people. And one does not take the honor upon himself, but he is called by God, just as Aaron was. So also Christ did not exalt himself to be made a high priest, but was appointed by him who said to him, "Thou art my Son, today I have begotten thee"; as he says also in another place, "Thou art a priest for ever, after the order of Melchizedek."
The Gospel According to Mark 8:34-38; 9:1
The Lord said: "If anyone wishes to come after me, let him deny himself and take up his cross and follow me. For whoever would save his life will lose it; and whoever loses his life for my sake and the gospel's will save it. For what does it profit a man, to gain the whole world and forfeit his life? For what can a man give in return for his life? For whoever is ashamed of me and my words in this adulterous and sinful generation, of him will the Son of man also be ashamed, when he comes in the glory of his Father with the holy angels." And he said to them, "Truly, I say to you, there are some standing here who will not taste death before they see the kingdom of God come with power."

Homily for The Sunday of Gregory Palamas, on The Jesus Prayer
Homily Archives 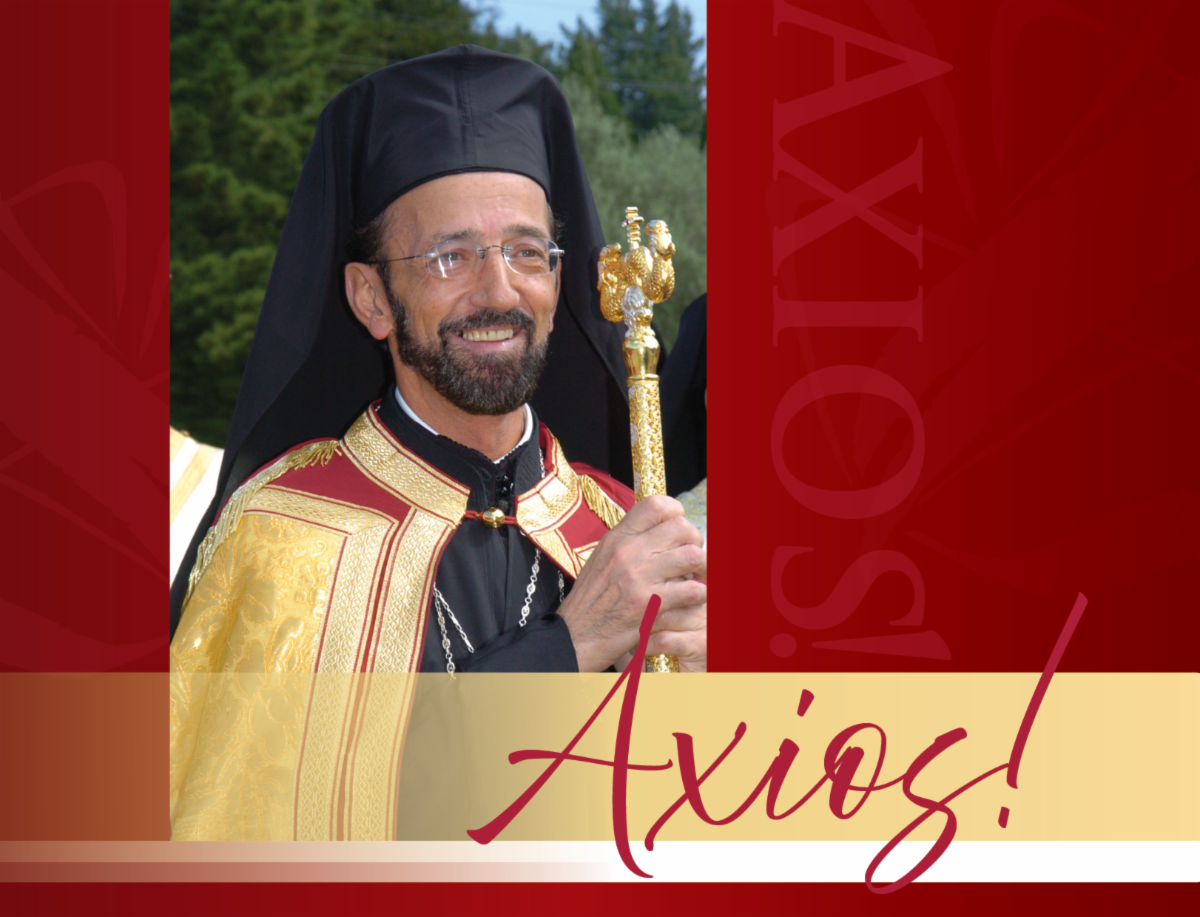 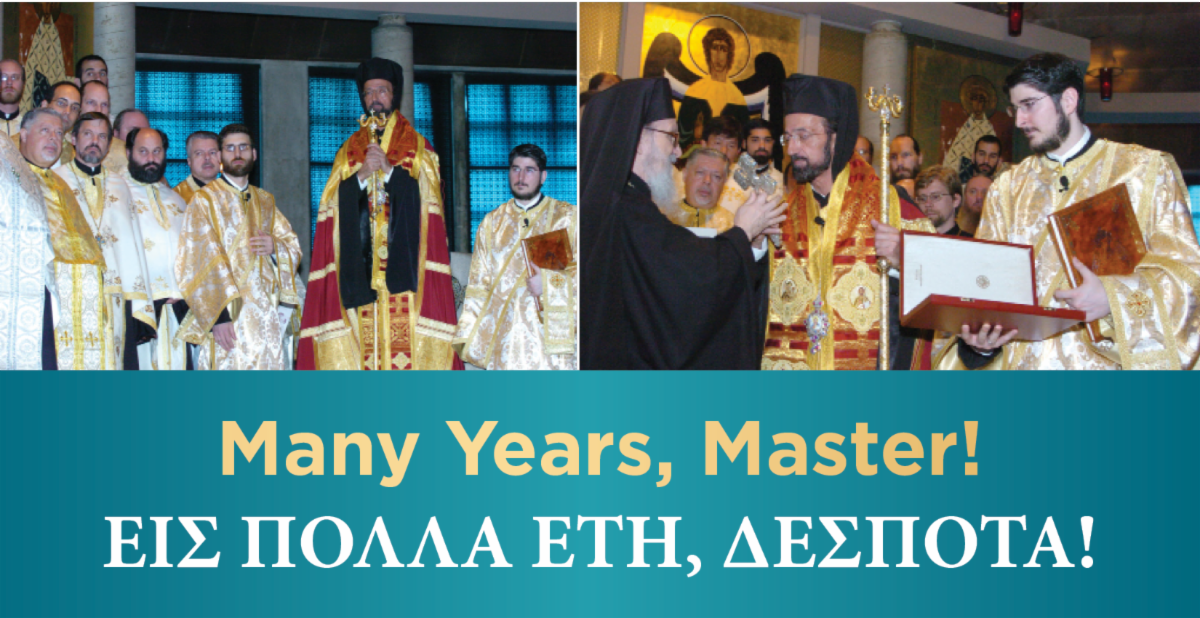 "Among the first remember, Lord, our Archbishop Gerasimos;
grant him to Your holy churches in peace, safety, honor, and health,
unto length of days, rightly teaching the word of Your truth."
From the Divine Liturgy of Saint John Chrysostom 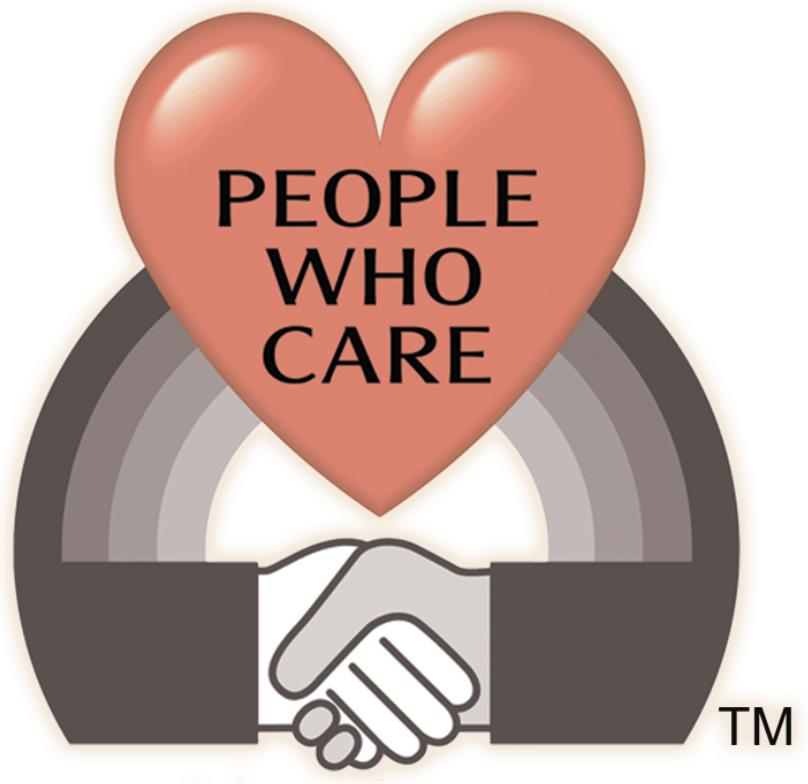 People Who Care
Volunteer Informational Meeting
Wednesday, April 21st
1:30-3:30pm
People Who Care Office
147 Grove Avenue
Prescott
928-445-2480
People Who Care volunteers provide caring non-medical assistance for adults unable to drive due to age-related and/or physical limitations. This allows an individual to continue living in their own homes and remain independent as long as safely possible.
People Who Care is a community-based nonprofit with programs in Prescott, Prescott Valley, Dewey and Chino Valley. Volunteers help in the community where they and enrolled Neighbors live. The majority of our Neighbors live alone.
People Who Care offers volunteer assistance with a one to one situation by helping
with transportation to healthcare/business appointments, grocery shopping, personal paperwork, visiting, caregiver relief, and more.
People Who Care requests wearing of masks, and social distancing. 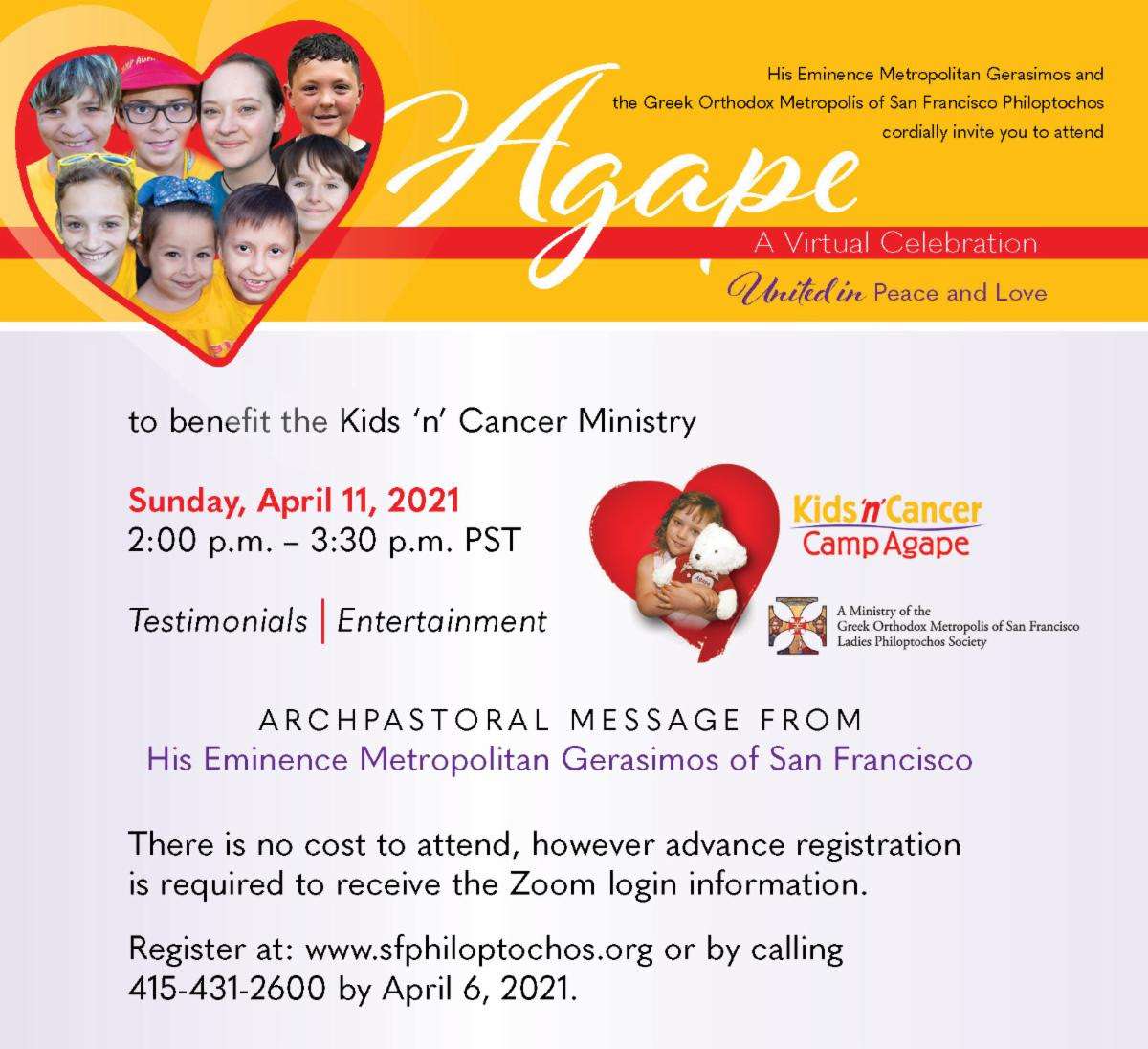 Understanding & Moving Through Conflict with Communication that Connects
The Greek Orthodox Metropolis of San Francisco Office of Youth and Young Adult Ministries and the Family Wellness Ministry is offering a new three-part series for married and engaged couples this spring.

“Coming Home to a Better Marriage” continues on Thursday, April 8, 2021 at 6:30 p.m. PST with Rev. Father Tom Tsagalakis leading a discussion on “One Fight, Two Winners”. Many avoid conflict believing it leads to negative results. Others engage at resolving conflict only to get angry, frustrated, feeling rejected and criticized. Proverbs 12:18 tells us that reckless words pierce like a sword, but the tongue of the wise brings healing. “One Fight, Two Winners” invites us to respond to conflict with wisdom as we discover that conflict done well offers opportunities for true intimacy, understanding, and connection.
Read More
Sign Up Today!
One more session coming up on May 13: “Stop the Insanity!” led by Rev. Father Timothy Pavlatos. Attempting to resolve conflict using the same methods while looking for a different outcome is a classic example for the definition of insanity. In part 3 of this series you will learn some practical tips on how to engage conflict in different, and healthy ways, as well as learn how perspective taking can be the catalyst in helping you create deeper connections and positive changes in your marriage. 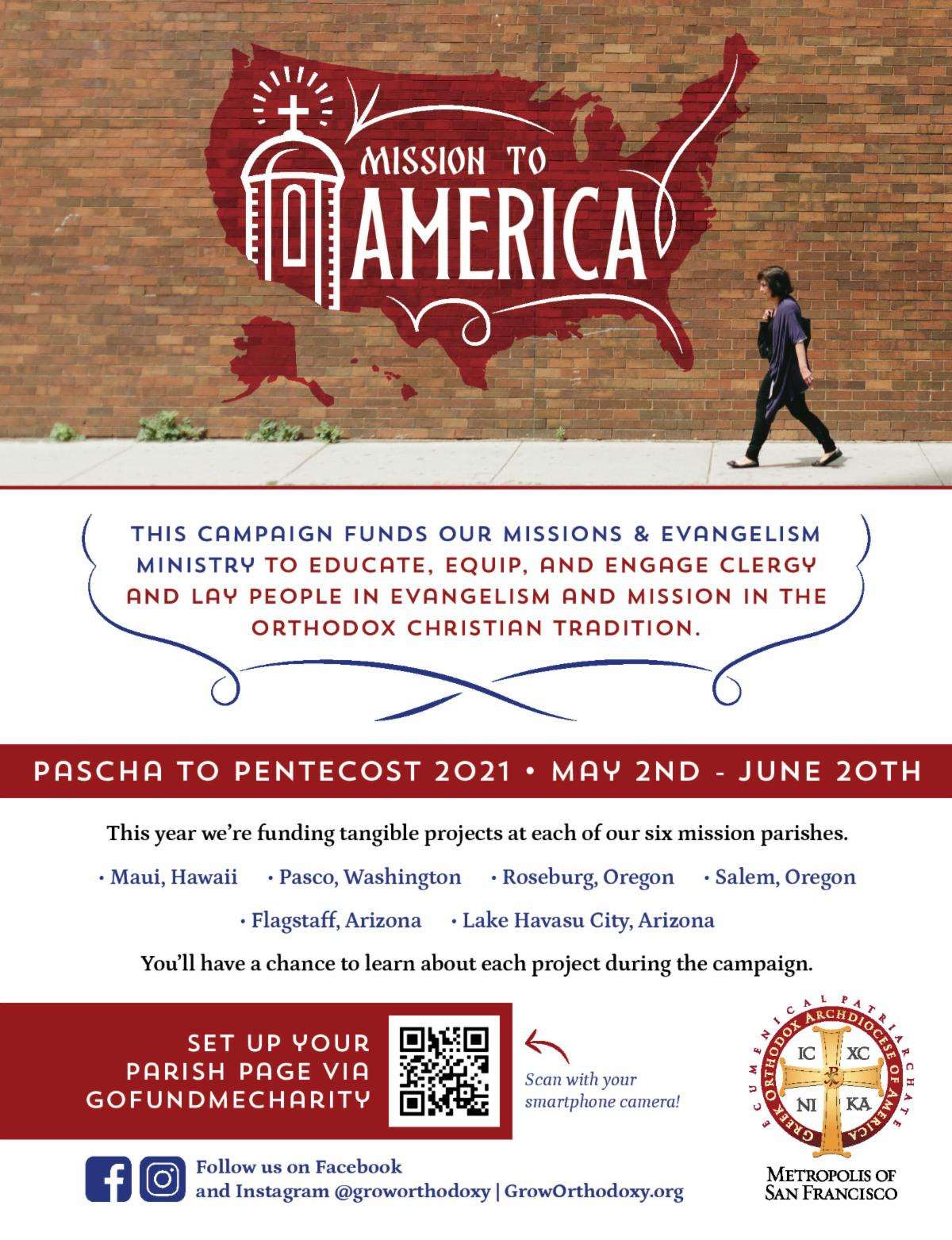 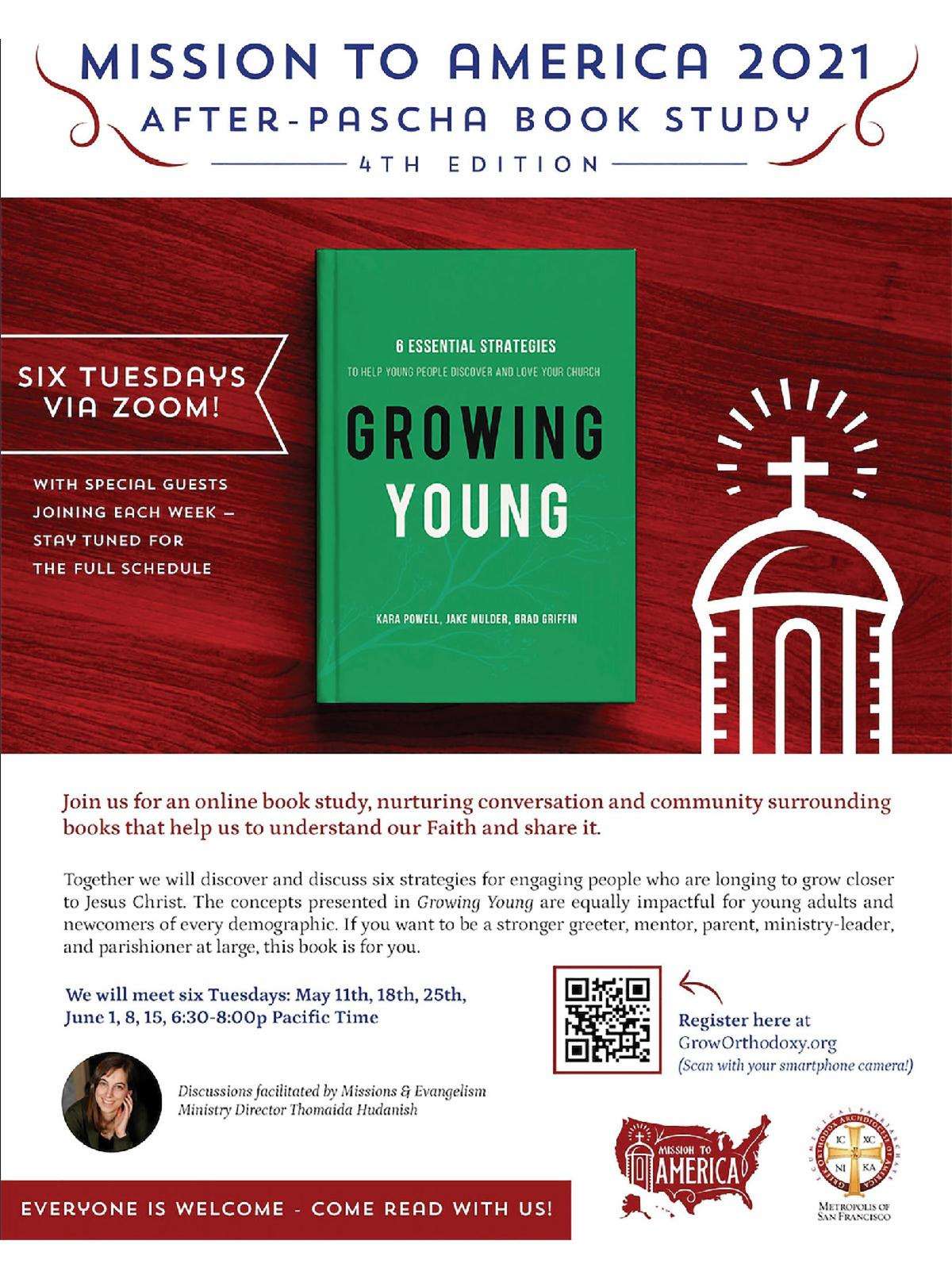