The final Paraklesis service is this (Friday) evening at 6pm. Please make an effort to attend this beautiful service of supplication to the Theotokos! 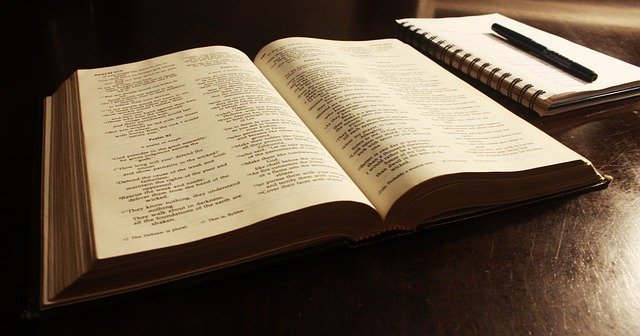 This past Thursday, August 12th, we began a new Bible Study of sorts. We will continue to meet on the second and fourth Thursdays of the month, in the church nave. We will meet again Thursday morning, August 26th, time to be determined (stay tuned!).

We will include a little bit of time at the end for discussion. But the for the most part this is a time for us to gather to pray, and to quietly read the Scriptures together.

Please bring a Bible and something to take notes.

I’ve also attached  a description of the process of Lectio Divina (Holy Reading), from the Monks of New Skete.
At our first gathering on Thursday, 12th, we will briefly review it before we get started.

A Description of Lectio Divina (Sacred Reading). From- In the Spirit of Happiness, by the Monks of New Skete.pdf 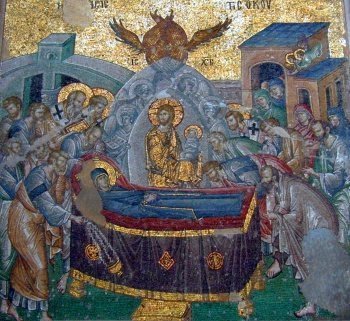 Sunday, August 15th, we commemorate the Dormition of the Most Holy Theotokos
Concerning the Dormition of the Theotokos, this is what the Church has received from ancient times from the tradition of the Fathers. When the time drew nigh that our Savior was well-pleased to take His Mother to Himself, He declared unto her through an Angel that three days hence, He would translate her from this temporal life to eternity and bliss. On hearing this, she went up with haste to the Mount of Olives, where she prayed continuously. Giving thanks to God, she returned to her house and prepared whatever was necessary for her burial. While these things were taking place, clouds caught up the Apostles from the ends of the earth, where each one happened to be preaching, and brought them at once to the house of the Mother of God, who informed them of the cause of their sudden gathering. As a mother, she consoled them in their affliction as was meet, and then raised her hands to Heaven and prayed for the peace of the world. She blessed the Apostles, and, reclining upon her bed with seemliness, gave up her all-holy spirit into the hands of her Son and God.

With reverence and many lights, and chanting burial hymns, the Apostles took up that God-receiving body and brought it to the sepulchre, while the Angels from Heaven chanted with them, and sent forth her who is higher than the Cherubim. But one Jew, moved by malice, audaciously stretched forth his hand upon the bed and immediately received from divine judgment the wages of his audacity. Those daring hands were severed by an invisible blow. But when he repented and asked forgiveness, his hands were restored. When they had reached the place called Gethsemane, they buried there with honor the all-immaculate body of the Theotokos, which was the source of Life. But on the third day after the burial, when they were eating together, and raised up the artos (bread) in Jesus' Name, as was their custom, the Theotokos appeared in the air, saying "Rejoice" to them. From this they learned concerning the bodily translation of the Theotokos into the Heavens.

These things has the Church received from the traditions of the Fathers, who have composed many hymns out of reverence, to the glory of the Mother of our God.
Not accidentally, this feast is set near the end of the Liturgical year to show us end, which is to say, the aim of a life in Christ. The Mother of God, who bore the Savior in her womb, is now borne by Him into the heavens in her repose. We too, in bearing Christ, and bearing witness to him, look to the day when we are raised by him into everlasting life.

Apolytikion for Dormition, Mode 1
In giving birth thou didst retain thy virginity, in thy dormition thou didst not forsake the world, O Theotokos. Thou wast translated unto life, since thou art the Mother of Life. And by thine intercessions dost thou deliver our souls from death.
Kontakion for Dormition, Mode plagal 2
The grave and death could not hold the Theotokos, who is unsleeping in her intercessions and an unfailing hope in her mediations. For as the Mother of Life she was translated unto Life by Him who dwelt in her ever-virgin womb.

Most Holy Theotokos, pray to your Son and our God that our souls may be saved!

Matins Gospel: The Gospel according to Luke 1:39-49, 56
In those days, Mary arose and went with haste into the hill country, to a city of Judah, and she entered the house of Zacharias and greeted Elizabeth. And when Elizabeth heard the greeting of Mary, the babe leaped in her womb; and Elizabeth was filled with the Holy Spirit and she exclaimed with a loud cry, "Blessed are you among women, and blessed is the fruit of your womb! And why is this granted me, that the mother of my Lord should come to me? For behold, when the voice of your greeting came to my ears, the babe in my womb leaped for joy. And blessed is she who believed that there would be a fulfillment of what was spoken to her from the Lord."

And Mary said, "My soul magnifies the Lord, and my spirit rejoices in God my Savior, for he has regarded the low estate of his handmaiden. For behold, henceforth all generations will call me blessed; for he who is mighty has done great things for me, and holy is his name." And Mary remained with her about three months, and returned to her home.

St. Paul's Letter to the Philippians 2:5-11
Brethren, have this mind among yourselves, which is yours in Christ Jesus, who, though he was in the form of God, did not count equality with God a thing to be grasped, but emptied himself, taking the form of a servant, being born in the likeness of men. And being found in human form he humbled himself and became obedient unto death, even death on a cross. Therefore God has highly exalted him and bestowed on him the name which is above every name, that at the name of Jesus every knee should bow, in heaven and on earth and under the earth, and every tongue confess that Jesus Christ is Lord, to the glory of God the Father.
The Gospel According to Luke 10:38-42, 11:27-28
At that time, Jesus entered a village; and a woman called Martha received him into her house. And she had a sister called Mary, who sat at the Lord's feet and listened to his teaching. But Martha was distracted with much serving; and she went to him and said, "Lord, do you not care that my sister has left me to serve you alone? Tell her then to help me." But the Lord answered her, "Martha, Martha, you are anxious and troubled about many things; one thing is needful. Mary has chosen the good portion, which shall not be taken away from her." As he said this, a woman in the crowd raised her voice and said to him, "Blessed is the womb that bore you, and the breasts that you sucked!" But he said, "Blessed rather are those who hear the word of God and keep it!"

Did you know? We have a parish-wide Meal Train set up for those in need of a little extra help with meals help during a major life event.
If you, a family member, or another parishioner are recovering from illness, injury, or a medical procedure, have experienced a death in the family, have a new baby, or have moved, please let either Father Jeffrey or Presbytera Marisa know.
Presbytera will connect with you to coordinate details that work for you, and then set up the online Meal Train at mealtrain.com, which organizes all of the details from dates & drop-off times to meal preferences. 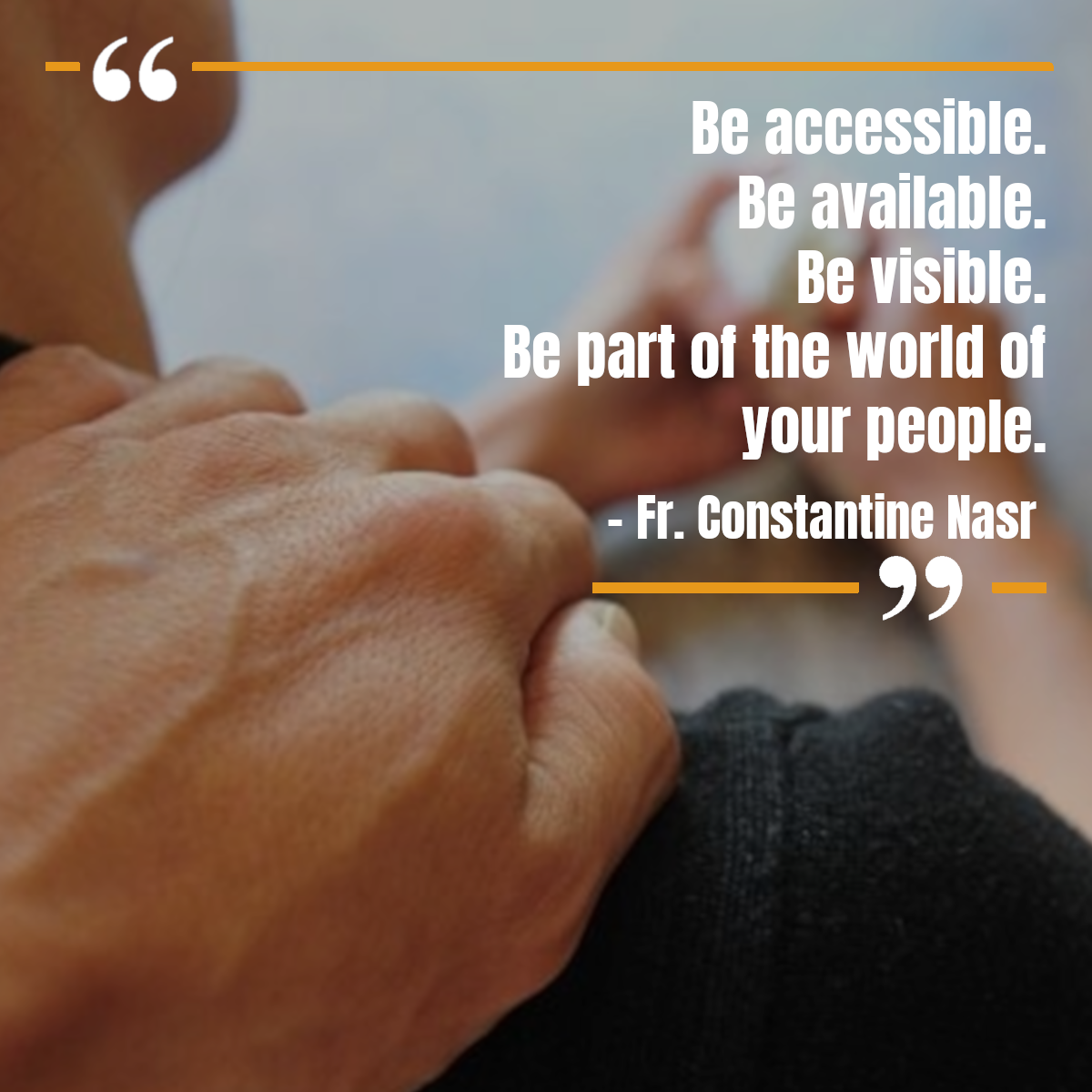 It's Evangelism Season!
During the Evangelism Season (June 20th to November 15th) we ask our parishioners to consider how they might engage in evangelism. Each week will be providing some quotes to consider on what the church teaches about evangelism as well as a challenge. The challenge is meant to encourage you to take chances and step out of your comfort zone a bit as well as prepare for an encounter with someone who asks you about your faith.

I pray that you will take advantage of this time and look forward to hearing your stories about how you are sharing with others what was given to you.

Connect with a friend (part 1)
Do you have a friend's name on your prayer card? If not, think about which of your friends you could add to your prayer list. Invite that friend over for dinner this week. If you want to talk about faith things, go ahead if you feel comfortable. However, try to make this encounter all about your friend. Make a game of it trying to discover three things you didn't know about your friend. Be more interested in them, then talking about yourself. That is it. Have a nice evening getting to know your friend better.
Sent by Laura Scott on Friday, August 13 at 1:00PM